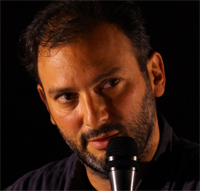 Interview with Josh Fox, the Oscar-Nominated and Emmy-Winning filmmaker behind GASLAND

“Up against the wall, mother-frackers!” — Swami Beyondananda

If you’ve heard or used the word “fracking” in recent months or years, you have filmmaker Josh Fox to thank. His award-winning film Gasland (2010) exposed the “gaslighting” by the fossil fuel companies in their attempt to sell “fracking” — defined as “the process of injecting liquid at high pressure into subterranean rocks, boreholes, etc. so as to force open existing fissures and extract oil or gas.”

Fox’s claims that fracking polluted ground water and caused earthquakes made him the target of a $100 million smear campaign on the part of the gas industry. Writes Josh, “This campaign of misinformation and slander was run by people we have heard quite a bit about in recent times: Steve Bannon, Andrew Breitbart, James O’Keefe and others.”

And what Steve Bannon and company did to Josh from 2010-2015, he did to the whole American electorate in 2016. Josh Fox was the beta test for the types of propaganda and smear the gang that created Cambridge Analytica is now known for worldwide. And Josh is telling his story in an uncompromising way like never before through a new film The Truth Has Changed.

Unlike most documentaries, The Truth Has Changed is the film version of a live performance by Josh relating how his personal story intertwines with America since 9/11. And, he and his team have created a crowd-funding campaign to support grassroots screenings and rallies to educate the public not just about fracking, but about the lengths the fossil fuel industry and their “fiends in high places” will go to destroy both the free press and democracy.

Josh Fox is best known as the Oscar-nominated, Emmy-winning writer/director of GASLAND, Parts I and II. Earlier this year he was invited to join the Academy of Motion Picture Arts and Sciences, a great honor for any filmmaker. He is internationally recognized as a spokesperson and leader on the issue of fracking and extreme energy development. His film How to Let Go of the World and Love All the Things Climate Can’t Change premiered at the Sundance Film Festival in 2016, won the Environmental Advocacy Award at the Washington DC Environmental Film Festival, and was released on HBO. As the Founder and Artistic Director of International WOW Company, Fox has established himself as a significant force in New York theatre. His work for the stage includes Surrender, an interactive war epic that was nominated for a 2009 Drama Desk Award and AUTO DA FE. The performance premiered in New York and toured to Japan in 2011.

Please join us for a first hand account of the “real story behind fake news” and help Josh spread the word and fund his campaign!

To find out more about Josh Fox and join his crowd-funding campaign for The Truth Has Changed, please go here.