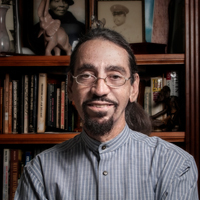 “First we had Black Lives Matter, then Blue Lives Matter – and it seems to be working. The whole country is now black and blue.” — Swami Beyondananda

This summer, the murder of George Floyd by police sparked a huge, nationwide protest movement and put Black Lives Matter into the headlines. Within days, hours actually, mass protests emerged across the country, and celebrities – from the entertainment industry to sports figures – all seemed to speak as one to support this movement.

What impact has the movement had and will it have in the future to insure that actual black lives are impacted for the better? How do we replace a criminally unjust criminal justice system with one that works for all? What is this “defund the police” issue all about, and what actually happened in Portland and Seattle?

Our guest this week, pioneering black journalist Glen Ford, will take us deeper as we examine to what extent #BLM is grassroots, and to what extent it is “Astroturf”, and we look at who benefits from this movement, and what this movement and media campaign may be keeping us from seeing. Hint: He uses the phrase “bamboozlement”, popularized by Malcolm X, to describe how the power structure has used the #BLM movement to keep folks from poking around the real issues.

The son of famed disc jockey Rudy “The Deuce” Rutherford, who was the first Black man to host a non-gospel television show in the Deep South – Columbus, Georgia, 1958 – Glen was reading newswire copy on-the-air at age eleven. Glen’s first full-time broadcast news job was at James Brown’s Augusta, Georgia radio station WRDW, in 1970 – where ‘The Godfather of Soul” shortened Glen’s surname to “Ford.”

ABF made Black broadcast history. For the next four years, the program generated national and international headlines nearly every week. Never before – and never since – had a Black news entity commanded the weekly attention of the news services (AP, UPI, Reuters, Agence France-Presse – even Tass, the Soviet news agency), as well as the broadcast networks.

In 1987, Ford launched “Rap It Up,” the first nationally syndicated Hip Hop music show, broadcast on 65 radio stations. During its six years of operations, “Rap It Up” allowed Ford to play an important role in the maturation of a new African American musical genre. He organized three national rap music conventions, and wrote the Hip Hop column for Jack The Rapper’s Black radio trade magazine.

Ford co-founded BlackCommentator.com (BC) in 2002. The weekly journal quickly became the most influential Black political site on the Net. In October, 2006, Ford and the entire writing team left BC to launch BlackAgendaReport.com (BAR).

To better appreciate how the “bamboozlement” has put glossy lipstick on the same old pig, please join me this for this show.