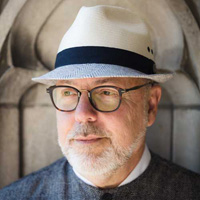 “It’s a dogma-eat-dogma world out there.” — Swami Beyondananda

In case you haven’t noticed, there is a pitched battle going on between two dueling paradigms – traditional religion, and scientific materialism – both of which hold part of the story, neither of which have the whole picture. As Bruce Lipton has pointed out, this modern religion called “science” actually uses words like “dogma” and “heresy” to enforce a set of beliefs, not unlike religion. And while science is supposedly a system for carefully assessing evidence and determining fact, I have met “fundamentalist” scientific materialists as fervent as their religious counterparts.

Unfortunately, while these two incomplete narratives are duking it out, we’ve lost the sane, sacred coherence of the spiritual and material acting in accord. Our guest on Wiki Politiki this week, Rabbi Rami Shapiro has dedicated his work and life to, in his words, “working for the spiritual liberation of humankind by freeing religion from the parochial and the political, the tribal and xenophobic, the one–dimensional and literal, to reclaim the Perennial Wisdom at the heart of humanity’s sacred myths, stories, rituals, and symbols.”

A Jewish practitioner of Perennial Wisdom, Rabbi Rami is an award–winning author of over thirty-six books on religion and spirituality. He received rabbinical ordination from the Hebrew Union College–Jewish Institute of Religion and holds a PhD in religion from Union Graduate School. A rabbinic chaplain with the USAF for 3 years, a congregational rabbi for 20, and a professor of religious studies for 10, Rabbi Rami currently co-directs the One River Foundation, is a Contributing Editor at Spirituality and Health magazine, and hosts the magazine’s bi-weekly podcast, Essential Conversations with Rabbi Rami.

Rabbi Rami also considers himself a “holy rascal” whom he defines as, “spiritual culture jammers who playfully pull back the curtain on the great and terrible wizards of parochial piety and shallow spirituality to free religion from hucksterism and pious pabulum.”

So … how can accessing what Rabbi Rami calls “the mystic heart of the world’s religions” get us through the dystopian desert we seem stuck in to the Promised Land of thrival for each and all? Join us for a seriously humorous and humorously serious conversation.