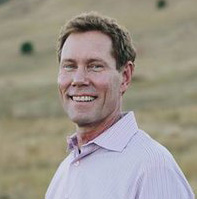 Interview with Author and Entrepreneur Scott Smith, Founder of the Foundation for a Better Economy

“If we are going to have a casino economy, let’s at least make sure we the people are the ‘house’.” — Swami Beyondananda

Ready to stretch your imagination?

OK … Imagine as if by magic, there is no more income tax, no more sales tax, or property tax. Then imagine we find a way to magically pay for everything the government currently spends money on … plus free health care for all, social security that is “secure” forever, and a guaranteed income of about $24,000 a year for every adult American. Oh, and then imagine all of this, AND we pay off the national debt.

Our guest this week, Scott Smith, an economic visionary with feet-on-the-ground experience has a plan to do just that. He calls his proposed legislation the Financial Freedom Act … and by taxing the $5 quadrillion in financial transactions that take place every year instead of the mere $16 trillion in income, we can finance the world of our dreams.

Over the past several generations our economy has shifted from the “material economy” (the part of the economy that is about making “things”) to the “monetary economy” (the part of the economy that is about making money). With factories closing and production jobs going offshore, an entirely new industry has become the way to create wealth. Our tax system that was created more than a century ago reflects a time when most of the money in the economy has given way to what is called “financialization”. Our economy is basically centered on making money rather than producing value. Meanwhile the financial economy — the world of interest, speculation, mergers and acquisitions — expands unfettered, while those who produce and provide “income” is forced to bear the burden.

I read the shortened version of Scott Smith’s book, and I find it one of the most promising, heartening, transformational and doable proposals I have ever seen. Sure, the financial institutions and reified powers in power will fight the idea tooth and nail. But as what the Swami would call “a critical mass of the heretofore uncritical masses” hear about it, the movement to enact it will make the Tea Party and Occupy movements seem like sewing circles.

He is founder and former publisher of Kidz Magazine, which invited young readers to submit content. The publication grew from a local magazine to an international media channel, with a circulation that spanned 30 nations. Scott also is the co-founder of two Colorado charter schools, Summit Middle School and Peak-to-Peak Charter School, the latter of which is ranked among the nation’s top schools by Time Magazine and U.S. News & World Report.

Seriously and humorously, this might be one of the MOST IMPORTANT INTERVIEWS I have ever done!

Tune in if you’re ready for REAL economic change in this country.

To find out more about the Financial Freedom Act, please go here https://abettereconomy.org/