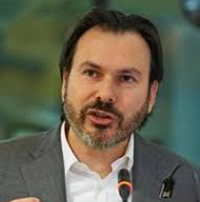 An Interview with Simon Anholt, Founder of “Good Country”

“It’s time to evolve from children of God to adults of Good.” — Swami Beyondananda

Nearly 60 years ago, U.S. President Dwight D. Eisenhower said, “I think that people want peace so much that one of these days governments had better get out of the way and let them have it.”

I’ve been calling the times at hand “the Eisenhower moment” because we the people finally have the technological capability to communicate instantly and speak in one voice.

Last week we spoke with Australian visionary activist Andrew Gaines about what he calls the Great Transition Initiative – a citizen led educational “movement of movements” to inspire mainstream commitment to transitioning to a life-affirming culture.

A worthy intention, and a great beginning…

And, the next question is, how will this intention be manifested, populated, and turned into a tangible movement for transformation?

My guest this week, Simon Anholt, introduces a new worldwide platform called Good Country which has the ambitious intention of creating and populating the world’s next super-power — the awakening population of the world acting in one accord as one “virtual country”.

Simon Anholt is an independent policy advisor based in the UK who has worked to help develop and implement strategies for enhanced economic, political and cultural engagement with many countries around the world. His TED talk on the “Good Country Index” has 5.5 million views, and as he will tell you has led to this exciting new platform.

After receiving some 20,000 emails from around the world from people who identified with a “good” country — i.e., one who collaborates to bring goodness to the world — Simon and his colleague Madeline Hung set about to find out how many other people around the world felt the same way. After two years of research they determined about 10% of the world’s population — some 700 million people — shared this global view. While 10% might seem like a modest figure, a country with a population of 700 million would be the third most populous country in the world, behind China and India and ahead of the U.S.

That’s when the idea emerged … why don’t we start a “virtual country”? As their website overview says: “We’re starting a new country. A country defined not by borders but by values. A country made up of hundreds of millions of people around the world, all motivated by a shared desire to make the world work better. A country with the power to bring about real change in the international community.”

Can a new virtual country with millions of awakened citizens actually spark collaboration among nations? How is this potentially world-changing institution being created, and how can you become a part of it?

If you’re curious, please tune in to find out.

To find out more about The Good Country, please go here. https://goodcountry.org/