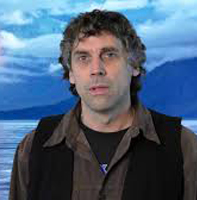 An Interview with Bill Moyer, Founder of the Backbone Campaign

“We have one political party with not enough backbone and another with way too much front-bone.” — Swami Beyondananda

Today’s show is about activism — in a time of reactivism.

With so much of the political discourse these days either “pro-Trump” or “anti-Trump” the one common denominator in either conversation is … Trump. As someone who feeds on media attention, he is paradoxically empowered by all the resistance and anti-Trump rhetoric.

Which leads to the question … how DOES the body politic express itself when both electoral politics and the mainstream media seems so shut down to non-corporate views? How do we assert our political will in a way that gets noticed? And how do we influence our elected officials to follow when they are unable to lead?

Our guest this week Bill Moyer, co-founder of the Backbone Campaign is a master of what he calls “artful activism” designed not just to help the Democratic Party “get some backbone”, but to empower citizens to act strategically and change the “political calculus” — i.e., to change the game from reactive to proactive. When we get ourselves off of the battlefield our opponents have already “fixed” and on to a new playing field, breakthrough can occur.

BILL MOYER is a fourth generation Washingtonian who lives with his wife and daughter in the woods of Vashon Island near Seattle. He co-founded the Backbone Campaign and has served as executive director since 2004. A leader in the theory and practice of artful activism, Backbone combines lessons of the performing arts with grand strategic principles from the Art of War to invigorate nonviolent social change movements. Bill and his Backbone colleagues have designed and produced hundreds of creative protests and trained thousands of change agents. They have helped transform mundane demonstrations into cultural happenings with innovative tactics like spotlights to project messages onto buildings, and helped introduce the world to kayaktivism during the sHellNo! campaign to stop Arctic drilling.

Bill also directs the Solutionary Rail project to plot a path for the US to transform a broken and dangerous railroad business model into a catalyst for social and environmental solutions that can act as an integral component of a just transition to sustainable society. Bill is proud to provide this strategic tool to bring together unlikely allies in otherwise divisive times.

Not only does the “backbone” represent steadfast courage, it also represents the nervous system that potentially unites the body politic to become “upstanding citizens.”

If your curious as to how ordinary citizens can act locally — playfully and effectively — to create change at the national level, tune in to find out.

To find out more about The Backbone Campaign, please go here. https://www.backbonecampaign.org/