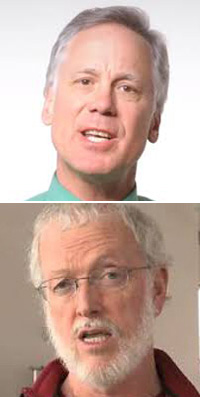 Michael Dowd, Author of Thank God for Evolution, and

“Is climate change real? Well, I just took a vacation in the future and spent a fabulous week in Tropicanada.” — Swami Beyondananda

As the two political parties keep our attention focused on “identity issues”, the elephant (and donkey) in the living room is the IDENTICAL ISSUE we face — our human civilization spinning itself outside the web of life. And as Swami has said, if we lose the Earth there goes the GDP.

This week, two Mikes share the mike to speak freely and frankly about the climate change issue — how and why it has been ignored and side-stepped, and why our species has a spiritual imperative to face the music and find new ways of dancing together. As Michael Mielke points out in his recent e-book, Delusions and Contradictions, neither conservatives nor progressives have REALLY confronted climate change, and the changes we need to make to preserve some form of human civilization on our planet.

The conservative form of denial is more blatant and obvious — dismiss the whole thing as a liberal plot to enrich George Soros. The progressive camp, says Mielke, is strung out on two forms of “hopium”. First, there is what he calls the “Tinkerbell Effect”, the hope that the magic of technology will come up with a fix that will allow us to continue using the energy we are using and sustain a civilization. The other form of denial is imagining that the reforms of the Paris Agreement (which we are not even following) will be enough to prevent the collapse of our civilization and mitigate the climate disasters that are already happening.

Meanwhile, there are those climate change activists who have fallen into despair and resignation, as they sense that it’s too late, and that society will not and cannot make the necessary changes in time.

That brings our second Mike to the mike … Michael Dowd is an Evangelical Christian (don’t worry, his wife Connie Barlow is an atheist scientist) who has written a wise book with the whimsical title, Thank God for Evolution. Dowd maintains that it is our spiritual imperative to step away from otherworldly conversations about the nature of God, to focus on the this-worldly reality of “the God of nature.” Dowd sees evolution as a “reality-based creation story” where “ecology becomes theology” and religion focuses not on the miracles of the past but how we collectively become “the savior of our future” — the “prodigal species.”

If you find yourself stuck in hopium, denial or despair about the future of human life on the planet, join us for this sober yet inspiring conversation about what can be done NOW while we are still in “pre-disaster” mode — and how we can honestly engage friends and family in this life-or-death conversation.

You can find out more about Michael Mielke and Delusions and Contradictions here,  and here.

You can read more about Michael Dowd here.