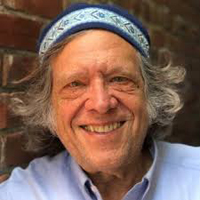 “When a global Marshall Plan replaces the current ‘martial plan’ humankind will finally live up to its name.” — Swami Beyondananda

There is a concept in Jewish theology called Tikkun Olam, roughly translated as the healing of the world. According to 16th century Rabbi Isaac Luria, in order to set the world right humans must be involved in this repair of the world. In our own times, this call for restoring wholeness has been taken up by this week’s Wiki Politiki guest, Rabbi Michael Lerner, founder of Tikkun magazine and of Beyt Tikkun synagogue in Berkeley, California.

Rabbi Lerner is the author of several groundbreaking books, including The Politics of Meaning: Restoring Hope and Possibility in an Age of Cynicism, which caught the attention of Bill and Hillary Clinton, who invited him to stay at the White House. Ten years later, he wrote The Left Hand of God: Taking Back Our Country from the Religious Right, a book that pointed out that by focusing primarily on economic issues, progressives left the dealing with the spiritual malaise so many Americans were feeling to the religious right.

In 2005 Lerner became chair of The Network of Spiritual Progressives whose mission was to “challenge the materialism and selfishness in American society and to promote an ethos of love, generosity, and awe and wonder at the grandeur of the universe.”

His latest book is Revolutionary Love: A Political Manifesto Heal and Transform the World, where he lays out his vision of a caring society that evolves past the narcissistic memes of capitalist dogmas and self-deceptive, self-help teachings. Rabbi Lerner’s unique perspective comes not only from his spiritual and political foundations, but also from his background as a psychotherapist.

If you are wondering how we DO make the shift from predominantly domination to collaboration and cooperation, please join me for this show.

To find out more about Rabbi Lerner and Tikkun, please go here: https://www.tikkun.org/