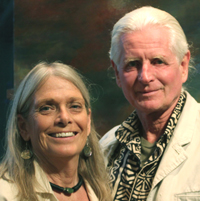 Interview with Connie Baxter Marlow and Andrew Cameron Bailey, Researchers and Makers of the Film “Seeds of Freedom”

“Instead of pulling apart in a tug-of-war, we need to pull together in a tug of peace.” — Swami Beyondananda

My favorite pleasantly provocative and curiosity-inducing question is … “Did you know?”

Did you know … that there were fifty-four years of peace and friendship between the Mayflower Pilgrims and the Wampanoag Indians in Plymouth Colony between 1621 and 1675?

You didn’t? Neither did I until I met this week’s guests Connie Baxter Marlow and Andrew Cameron Bailey some years ago, and they told me the inspiring story of how

visionary leaders of two radically different cultures met and worked together to maintain an inter-cultural exchange that became what Bailey and Marlow call the “First Great Synthesis” between Europeans and American Indians. While many – including my own book Spontaneous Evolution credit the Iroquois Nation with the ideals and structures of governance that inspired our Constitution – Marlow and Cameron offer compelling evidence that many of these “seeds of freedom” came from the Pilgrims themselves.

Connie Baxter Marlow is a descendant of Mayflower Pilgrims John Alden and Priscilla Mullins, known as America’s First Couple, made famous by Henry Wadsworth Longfellow’s poem. Her great-great-grandfather James Phinney Baxter, a pre-eminent historian of early New England, was President of the New England Historical Genealogical Society for 20 years. Connie brings a unique perspective to her ancestors’ dreams for humanity, in that she has spent 30 years in close association with visionary Native American elders throughout the United States and Mexico, and has been creating forums for them to share their understanding of the nature of the Universe for over 20 years.

Andrew Cameron Bailey calls himself a “latter-day pilgrim.” He sailed across the Atlantic and arrived in America on Thanksgiving Day, 1969. He was born in England and grew up in South Africa amongst the Zulus, holds degrees in science, English and social anthropology, and was a chemistry professor before emigrating to the United States. After meeting Connie in 2003 he became disturbed at the level of misinformation in the American psyche surrounding the settling of New England, and the ongoing deprecation and denigration of the Pilgrims and the Puritans in present-day America. Andrew is the author of the 21st Century historical mystery novel/screenplay “The Mayflower Revelations,” that sets the historical record straight in an entertaining, enlightening and inspiring way.

If you’re ready to entertain a more complete and holistic view of the founding of our country, please tune in.