The Doctrine of Discovery … it sounds so official, so scholarly.

And yet, it has been the blueprint for not just colonization of the Americas, but for the exploitation, domination and genocide of its peoples. Did you know … that the Inter Caetera papal bull issued by Pope Alexander VI May 4, 1493 called for non-Christian nations to be reduced and subjugated (“barbare nationes deprimantur”)?

Not only did this innocuous-sounding “doctrine of discovery” justify and fuel the destruction of the Native cultures in the Americas and the pillaging of its resources, but the abrogation of treaties with the Native American peoples has been justified by our U.S. Supreme Court based on that same 500-year-old doctrine?

Our guests this week, Native American scholar and activist Steven Newcomb, and his daughter Shawna, share the awful truth of what the dominator worldview has wrought (Donald Trump seems like the cherry on the whip cream when you learn this deep history) and then point us to the awesome opportunity to heal and rise from the ashes. 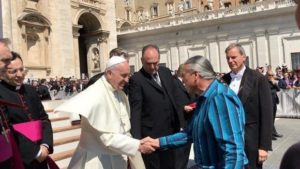 Steven Newcomb (Shawnee, Lenape) is one of the world’s leading scholars on the Doctrine of Discovery and Domination, as well as the author of the best-selling book Pagans in the Promised Land: Decoding the Doctrine of Christian Discovery (Fulcrum, 2008). He is a co-producer of the documentary movie, “The Doctrine of Discovery: Unmasking the Domination Code,” directed and produced by Sheldon Wolfchild (Dakota), with narration by Buffy Sainte-Marie (Cree). In 1992, Newcomb, along with Birgil Kills Straight (Oglala Lakota) founded the Indigenous Law Institute and began a global campaign to call upon the Holy See to revoke the Vatican papal bull of discovery and domination of May 4, 1493. That campaign has developed into a worldwide movement.  www.originalfreenations.com Here is a photo of him face to face with Pope Francis, asking him to revoke the bull.

Shawna Bluestar (Shawnee, Lenape, Azteca) is an international speaker and visionary women’s leadership and business consultant, with a focus on holistic wellbeing and spirituality. She is passionate about helping people find greater meaning by living their purpose, and sharing their unique gifts and voice to help make a positive difference on the planet. Shawna has joined with her father to lead a global movement for conscious change. Together they speak about the negative effects of The Doctrine of Discovery, unmasking The Domination Code and a how to find balance and with healing The Reverence Code, based on ancient and Indigenous wisdom. Shawna shares profound spiritual messages of inspiration and has dedicated her life and work to bring healing for humanity, the planet and future generations. www.shawnabluestar.com

Evolving from domination to reverence will take our own species off the Endangered (and Endangering) Species list … and, by getting an understanding of the “invisible” beliefs that perpetuate exploitation of the natural world and other humans, we can create the awareness and acknowledgment that will help us redress and heal the condition. Our species’ life depends on it!

Please join us for this sobering, and yet ultimately inspiring conversation about our past, present and future.