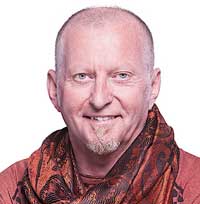 Swami’s Dictionary – Gobble-ization: The practice of mining the global economy (by saying “mine, mine, mine”) so that greedy turkeys gobble everything up. — Swami Beyondananda

When Bruce Lipton and I published Spontaneous Evolution in 2009, Barack Obama had just been elected President of the United States. In our first hardback edition of the book, we celebrated the election as a sign of a great evolutionary upwising, indicating that the majority of Americans prefer living into the “we’re-all-in-it-together” meme as opposed to the “every-man-for-himself” dominate-or-be-dominated paradigm.

And while I still suspect that most of us would rather live by the Golden Rule as opposed to the rule of gold, the neoliberalism of the Obama Democrats has shown itself to NOT be the vehicle that will take us there. A dozen years after the heady celebration of Obama’s election, the body politic is locked in a mutually-destructive battle-to-the-death that will insure that, whoever wins the election, the American people will lose.

How did we get here? And now that we are in this war of the worlds, what now? Can we agree on an agreed upon reality? Can we call forth a sane and sacred center to lead us from the middle?

Our guest on Wiki Politiki this week is Canadian-based journalist Guy Crittenden, who recently posted a piece that caught my eye – An Open Letter to Bill Gates – that calls out the technological “fix” that will further destroy the natural world. Guy Crittenden enjoyed a career as an environmental journalist and magazine editor for 25 years, winning 14 Kenneth R. Wilson Awards for excellence in business journalism and was twice a finalist at the National Magazine Awards.

Over New Years Eve 2013-2014 Crittenden embarked on a life-changing trip to Peru after which time he became a full-time freelance researcher and writer focusing on environmental and consciousness shift themes, and geopolitics.

His book The Year of Drinking Magic: Twelve Ceremonies with the Vine of Souls won the Silver Medal at the 2018 Independent Book Publisher Awards.

These days Crittenden is focused on writing about the impending Fourth Industrial Revolution and the Global Reset agenda of the World Economic Forum and related international bodies. He leads a group called the Rainbow Warriors that develops pamphlet material and street theatre ideas to protest what its members see as a global corporate coup d’état.

If you’re ready to look beyond the two sides to find a third way, please join us for this show.