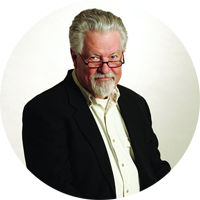 An Interview with Psychotherapist Brad Blanton, Author of Radical Honesty

“The truth shall UPSET you free.” — Swami Beyondananda

I first met Brad Blanton nearly 25 years ago, when his controversial book Radical Honesty: How To Transform Your Life By Telling The Truth, was first published. Our joke at that time was that our President, Bill “I-did-not-have-sex-with-that-woman” Clinton was a practitioner of “sporadical honesty.”

We have now collectively evolved (or devolved) to a place where our current president practices “radical dishonesty”, and where paradoxically his followers consider him trustworthy because he is “honest” about being a liar. Think about it. What other politician in recent memory has been celebrated for “telling it like it is” while so blatantly telling it like it isn’t?

My guest this week, Brad Blanton will offer his “radically honest” perspective on the “shituation”, and — knowing Brad — you can expect a wild ride that will leave you both elevated but with “feet on the ground.”

Brad Blanton, Ph.D is a psychotherapist, author, workshop leader, speaker, and the founder of Radical Honesty Enterprises. Dr. Brad Blanton describes himself as “white trash with a Ph.D.” Armed with quick wit and an engaging Southern accent, he speaks with an unwavering honesty that is both disarming and challenging, a quality that has earned him admirers as well as detractors.

His first book, Radical Honesty: How To Transform Your Life By Telling The Truth, became a nationwide best seller in 1996 and has been translated into twelve languages and published around the world. The revised edition was released by Sparrowhawk Publications in April, 2005.

His second book, Practicing Radical Honesty: How to Complete the Past, Live in the Present and Build a Future with A Little Help From Your Friends, is about the relationship between personal transformation and social transformation. In 2002, consistent with that same theme, he published Honest to God: A Change of Heart that Can Change the World (with Neale Donald Walsch). Also in 2002, he published Radical Parenting: Seven Steps to a Functional Family in a Dysfunctional World, which is about child rearing, and Brad says it is the most radical book he has ever written.

Brad has twice been an independent candidate for Congress from his rural home district in Virginia, running against Republican Eric Cantor, who later served as House Minority Whip.

If you’re wondering how to discern deep truth in a time of shallow lies — both personally and politically — tune in to find out.

To find out more about Brad and Radical Honesty, please go here https://www.radicalhonesty.com/start-here/