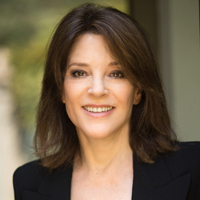 “If we want to heal the cancer on the body politic, we must first address the heart disease.” — Swami Beyondananda

Four years ago, rank and file Republican voters had the courage to follow their convictions and choose an outside-the-box, non-politician candidate who they felt best represented their world view. Establishment candidates like Jeb Bush, Marco Rubio, and even Ted Cruz fell by the wayside, and the Republican establishment had to fall in line behind the people’s choice, Donald Trump.

As MIT professor Otto Scharmer pointed out after the election, American voters had three choices in 2016: Move forward together, stay with the status quo, or move backward. Bernie represented moving forward together, but there is plenty of evidence that he was cheated out of the nomination  by the Hillary forces. Hillary, according to Scharmer, represented the status quo.

And we all know what happened. The status quo was rejected, and America took a giant step backward.

Now, here we are again, and the powers-that-be in the Democratic (sic) Party have been using their influence to marginalize and discredit the one truly “radical” candidate in the campaign, Marianne Williamson. Now by radical, I don’t mean Bernie Sanders radical or even AOC radical – I mean radical in its original meaning, getting to the root cause. Unlike any other candidate, with the possible exception of Tulsi Gabbard, Marianne’s platform – go here to see it for yourself – is the only one that gets to the ROOT of the “shituation”, the absence of a sane and sacred center. Consequently, the unchecked and unbalanced power of money has ruled, leaving we the people at the non-mercy of a heartless system.

And while I have always liked and admired Marianne, it wasn’t until I saw her in the second Presidential debate last summer that I appreciated the power of her voice being heard. She received genuine and heartfelt applause when she broke through fog of political clichés and challenged the Democratic Party not just to provide universal health care but to get to the root of what has been making us sick – industries putting toxins in the air, water and food, depleted soil, and a toxic economic environment where 40% of us live from paycheck to paycheck, all too often without the paycheck.

I originally envisioned this interview with Marianne as a way for her to present her platform as a vision for the coming decade that should inform the Democratic platform regardless of the candidate. Instead, she issued a challenge: If Republican voters had the courage and political will to support someone who spoke to their true agenda, how about progressives? Will progressives take up the challenge to move ahead – or fall back into some “safe” candidate who might or might not be able to defeat Donald Trump? And if by some stroke of grace, that “cancer” is excised, how about the underlying heart disease?

Half a century ago, John Lennon offered a similar challenge: “War is over … if you want it.”

Now the evolution is here … if we want it. Will we settle for a lesser evil … or stand for a greater good? If we have the courage and will and yes, faith to stand together we may never need to march again.

If you’ve written off Marianne Williamson as “unelectable” or if you are still undecided, go read her platform and see the depth of her ideas. More importantly, understand she will stand behind those ideas. Remember, Donald Trump was also “unelectable” … and if a miracle is indeed needed, who better to bring it about than a Course In Miracles teacher? Decide for yourself. Please tune in.