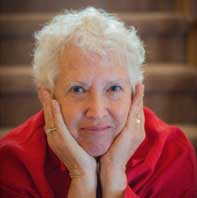 Interview with Carol Smaldino, Psychotherapist and Author of “The Human Climate: Facing the Divisions Inside Us and Between Us”

“There are no sides, only angles. And when we see it from the right angle, we’re all on the same side.” — Swami Beyondananda

With political discourse and political discord nearly synonymous, and with the phenomenon of “fake news” – where facts take a backseat to emotionally-fueled beliefs — maybe it’s time we look at the fact that feelings make more of a difference than facts do. Might this highly-charged politics “out there” have something to do with the emotional terrain “in here”?

Our guest this week, psychotherapist Carol Smaldino thinks so … she has written a book that speaks directly to the stormy political climate, The Human Climate: Facing the Divisions Inside Us and Between Us”, that examines the role of emotions in our political landscape, both in politicians and in the diverse populations and issues that make up this landscape.

As someone who speaks with and listens to “both” sides, what’s clear to me is that for the most part, each side sees the other side’s shadow – but not its own. Combine this with each side constantly receiving, embracing, and absorbing information that reinforces what they already “know” to be true. I know, I know. The other side is much more that way than we are. (Exactly what the other side is saying about us.)

All of which means it’s time for a “meta-conversation” where we become aware of and integrate our feelings so we don’t have to project them on to the other, and we become more aware of what pushes our buttons – and how to stay less susceptible to manipulation.

Carol Smaldino, is a social work psychotherapist, and has been a Huffington Post Contributor from 2008 through 2017. She was born and raised in Brooklyn, New York; she attended Madison High School, Brooklyn College and Wurzweiler (Yeshiva University) School of Social Work. She has also done coursework at NPAP (National Psychological Association for Psychoanalysis). Before graduate school, she worked at the Bureau of Child Welfare, Roosevelt Hospital Child and Youth Project. After social work school, she spent five years working at a residential treatment center. She was a therapist and supervisor and student at the New Hope Guild, and developed a private practice in NYC and then Port Washington, NY. She presently lives and works between Fort Collins, Colorado and Lucca, Italy.

If you’re curious about the EMOTIONAL story and storm behind the news – and the newsmakers — please tune in.

To find out more about Carol Smaldino and The Human Climate, please go here.