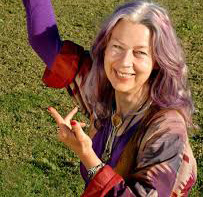 “If you don’t like the current programming, turn off your TV and tell-a-vision instead .” — Swami Beyondananda

Wiki Politiki listeners, you’re in for a real treat this week as we converse with “visionary activist”, astrologer, mythologist and wise woman Caroline Casey. The host of the Visionary Activist Radio Show on Pacifica (KPFA in Berkeley and KPFK in LA) for over 22 years, Caroline is also the “Chief Trickster at Coyote Network News, a mythological news service for the Liberating Trickster within us all.”

Caroline’s rich “uncommontary” weaves politics, mythology, astrology, and her wonderful way with language into a sharp and yet encouraging view of our current “shituation.”

In these times of manipulative political narratives, Caroline will help us recognize how the “trickster redeemer” can liberate us from the con artists who nowadays seem to be the only artists who aren’t starving. Most importantly, she helps liberate us from ways we con ourselves, particularly when we become so righteously convinced of our own “rightness” that we miss seeing our own shadow.

A native of Washington DC, Caroline is the last of five children born to an Irish-Democrat-New-Deal Congressman, and a politically active Yankee Swede. She rode on her Dad’s shoulders to Kennedy’s snowy Inauguration, and held his hand in speaker of the House McCormick’s office at Kennedy’s funeral. As she quips, “I grew up around politics, so I was disabused as a child.”

She began studying astrology as a teenager, and considers it one of the great “meta-languages” to help humanity find its place in the cosmos. She has also immersed herself in magic, mythology, literature and social activism, and weaves them all together to — in her words — “compost tyranny into a nutrient for a Renaissance of Reverent Ingenuity, and compost the hubris of humanism into the truth of animism.”

Caroline still lives in the Washington, D.C. area (she calls it a “spiritual hardship post”) and now applies everything she has learned and is learning to bring wisdom, compassion and playfulness to what she calls “the dire beauty of now.”

In addition to her weekly radio show and conference presentations, Caroline does private astrological readings, to guide all to their own autonomy. She is also launching a new 7-week course, Way of the Trickster launching on May 8th. Details for everything can be found at www.CoyoteNetworkNews.com