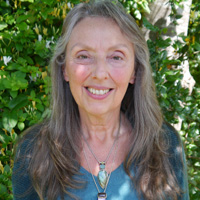 “It’s time to re-grow our economy from the grassroots up.” — Swami Beyondananda

In these times that portend both economic and ecologic collapse, what if there were one simple thing that could help us shift course to a life-affirming civilization living and thriving inside the web of life?

Turns out that there IS such a thing, and when people hear about it, they usually have two immediate responses:

We are talking about agricultural industrial hemp, not to be confused with smokeable cannabis. In recent years, medical cannabis has become legal in a number of states, and “recreational” use of cannabis is now legal in a few places as well. Not to detract from the medical or even “entheogenic” uses of smokeable herb — but in the long run, it will be hemp itself that will have the most lasting impact.

My guest this week is someone I’ve known for many years — my wife Trudy Bhaerman. Starting with her own initiation into healthy foods nearly 50 years ago, and then her background in holistic health and nutritional healing, Trudy is a brilliant synthesizer of diverse information, mainly focused on the health and well being of each and all. In the early 1980s, she worked at a nutritional clinic in Detroit that routinely “cured” conditions such as diabetes, cancer and MS. Later, she professionally recorded holistic health seminars, and became a health educator in her own right.

A few years ago, she began to notice the burgeoning hemp industry — and the wide variety of products that can be manufactured from hemp, some 25,000 in all! She also was reminded that growing hemp has been illegal in this country for 80 years, and that the hemp products industry here was spending some $3 billion a year to import hemp. Fortunately, Sen. Mitch McConnell (R-Kentucky) and his colleague Rand Paul both are eager to make it legal to grow hemp in the U.S., as they see it as a replacement for the tobacco currently being grown. The current Senate Farm Bill includes a provision that will take agricultural hemp off the drug schedule so that farmers here can grow it.

No guarantees, but things are heading in this direction.

That’s why it’s so important that EVERYONE educate themselves on the benefits of hemp. It restores the soil, and grows so tall so fast that it naturally chokes out weeds. It can be used to make rope and sturdy fabric, and even hempcrete buildings. Hemp is food, medicine and biofuel. Hemp paper can replace paper made from wood, and hemp-based composites are already being used in auto construction.

And … in learning the full story of how hemp was outlawed along with marijuana, we get an object lesson in how powerful money interests thwart the wellbeing of us all.

I’ll say no more, because Trudy says it so much better.

Tune in for this informative and inspiring conversation.