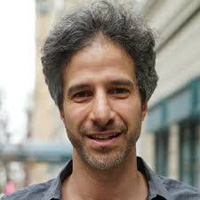 Interview with Tarek Mounib, Producer of the Documentary “Free Trip to Egypt”

“The one thing that will save humankind is human kindness.” — Swami Beyondananda

It was more than 50 years ago that an envelope-pushing motion picture broke the issue of interracial marriage into mainstream consciousness. In “Guess Who’s Coming to Dinner?” starring Spencer Tracy, Katherine Hepburn, Sidney Poitier and Katherine Houghton, two families get to confront societal taboos and personal conflicts as an interracial couple announce their pending marriage. The movie ends with mutual acceptance and both families sitting down to dinner together.

There is something about the ritual of sharing food, company and conversation that can transform the illusion of separation into the truth of oneness. And just as the aforementioned movie opened doors and possibilities half a century ago, perhaps a new film can help heal the misunderstandings and conflicts between Americans and the Muslim world.

Tarek Mounib, a Canadian-Egyptian entrepreneur living in Switzerland was troubled by a world that seemed ever more divided and polarized. In response to increasing levels of anger and hatred towards “the other” on American social and broadcast media, he resolved to reach out to the very people who fear his culture, with an intriguing idea. With the aim of trying to build mutual understanding, Tarek traveled across the United States in order to find Americans who feel threatened by Islam and offered them a Free Trip to Egypt. (Spoiler: He goes to Donald Trump rallies to find these people.)

The resulting documentary by the same name is the story of those who had the courage – despite their preconceptions – to take Tarek up on the offer. You’ll have to see the movie to get the full picture, but I predict you will be moved, transformed and encouraged about our potential to “re-humanize” the other. (See below for special screening information)

I am thrilled and honored to have Tarek as my guest on Wiki Politiki this week in particular, because the film will be specially screened in 500 theaters nationwide this Wednesday, June 12th. You can click here to find out where it is playing near you.

The filmmakers have even included a downloadable Discussion Guide which includes my article “Hearty Laughter –A Heart-to-Heart Connection That Builds Bridges,” along with many other talking points, interviews with the film makers, and suggestions for engaging around the movie.