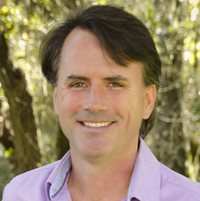 A Conversation with Stephen Dinan, Author and CEO of Shift Network

“The only way to overgrow the ‘deep state’ is by cultivating a deeper state.” — Swami Beyondananda

Once again on this week’s Wiki Politiki, we look to shift our focus from the fear and anger generated by Donald Trump (and those who oppose him) to creating a movement that gathers all good intentions under “one big intent” — a world that works for all.

Bucky Fuller called this “the World Game” and it sure beats the alternative, the “end-of-the-world game.” Indeed, our nation and our entire species is going through an existential crisis — where we choose if we want to continue to exist, or follow our reptile brain down the path of the dinosaur. (Just think … millions of years from now, whoever is around could be running their vehicles on OUR blood!)

However, if we want to be driving our own cars, and our own karma, we need to restore the missing piece — actually, the missing peace — at the center of our society, a sense of “the sacred”.

This week’s guest, Stephen Dinan, is the author of Sacred America, Sacred World: Fulfilling Our Mission in Service to All, (https://www.sacredamerica.net/special/) where he suggests that a miraculous spontaneous remission for our species is possible, provided we undertake a “spontaneous re-missioning,” as we shift our mission from “everyone in it for themselves” to “we’re all in it together”, or as Swami would say, “from the rule of gold to the Golden Rule.”

Stephen Dinan is also President and CEO of The Shift Network, an educational platform that delivers virtual summits, courses, and trainings featuring over 1,000 thought leaders in domains as diverse as spirituality, peace, holistic health, psychology, parenting, enlightened business, shamanism, indigenous wisdom, and sustainability. The Shift Network has served over 1.5 million people worldwide, with customers in 170 countries.

Dinan is a graduate of Stanford University (Human Biology) and the California Institute of Integral Studies (East-West Psychology). He helped create and directed the Esalen Institute’s Center for Theory & Research, a think tank for leading scholars, researchers, and teachers to explore human potential frontiers. As the former director of membership and marketing at the Institute of Noetic Sciences, he was the driving force behind the Shift in Action program and the One Minute Shift media series.

If you’re looking to discover how we turn the ideal into the real deal, tune in.