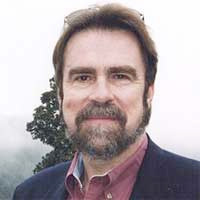 A Conversation with An Interview with Jim Kenney, Author of Thriving In the Cross-Current

“Of course Jesus believed in evolution. Otherwise he would have said, ‘Now don’t do a thing until I get back’.” — Swami Beyondananda

There’s a famous quote from Martin Luther King inspired by the writings of the American minister and transcendentalist Theodore Parker, “The arc of the moral universe is long, but it bends toward justice.”

Of course in these days where the very present arc of the immoral universe seems bent on injustice, some skepticism is understandable. This week’s Wiki Politiki guest, author and cultural educator Jim Kenney would say that his studies of cultural evolution indicate that our current “shituation” is an eddy in a river flowing relentlessly toward greater awareness and interdependence, a “cross-current” in the course of evolution, which ultimately only flows in one direction.

Kenney, who’s been recognized for decades as a leader in the global movement for intercultural understanding, calls his stance “reality-based hope” that the arc of our cultural (and spiritual) evolution is moving us closer to the Golden Rule, and further from the “rule of gold”.

Kenney is also the co-founder and executive director of Common Ground, an adult educational center offering a wide range of programs on the great cultural, religious, philosophical, and spiritual traditions and their implications for every dimension of human experience. He is also co-founder and coeditor of Interreligious Insight: A Journal of Dialogue and Engagement and, from 1988 to 2009, was consulting editor and a regular contributor to Conscious Choice, an alternative-living magazine based in Chicago.

For over thirty years, Jim has lectured widely on political, social, religious, and cultural issues. Over the past decade, his research and writing have focused on cultural evolution: how human societies adapt—sometimes dramatically—to a changing world. Thriving in the Crosscurrent is the pinnacle of that work.

As we come to realize that the attention-grabbing “current events” are really “cross-current events” in a much longer and deeper narrative, we can take actions today that will release our ship of state from the current dangerous eddy, and empower the “sea change” that will help us SEE CHANGE in our lifetimes.

Please join us for this surprising and inspiring conversation about our evolutionary “humanifest destiny”.