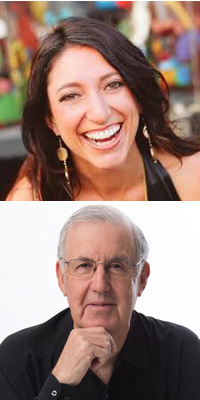 “Why humor and politics? Because there’s definitely something funny going on.” — Swami Beyondananda

What is the state of satire when “reality” is more perversely paradoxical than any comedy routine?

What happens when much of comedy censorship comes from … the left?

What’s funny in a world that has become insanely serious?

Alicia Dattner is a “wise gal” who’s done everything from stand-up to comedy coaching to solo shows, including One Life Stand, The Oy of Sex, and Eat, Pray, Laugh! She was voted Best Comedian in both the SF Weekly and SF Bay Guardian Reader’s Polls. Her fifth show, One Life Stand, a standup comedy special, is currently touring. She’s also creator of The Spiritual Comedy Festival and teaches highly-acclaimed storytelling workshops under the banner Solo Showdown. http://soloshowdown.com and http://aliciadattner.com

Alicia has also made the bold statement that the comedy club is “sacred space” where “anything goes”. 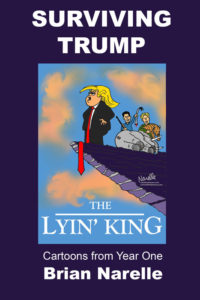 Brian Narelle is a multi-talented comic genius who began his career as the star of the cult classic film, Dark Star, and has been a successful puppeteer, animator and cartoonist. As puppeteer, he worked for the award winning children’s programs, Bingo and Molly and Buster and Me featured on the Discovery Channel and NBC. In addition to illustrating numerous books (including my own Swami For Precedent), he has taught cartooning at the Charles Schultz Museum. Brian now has a new book of cartoons, Surviving Trump — The Lyin’ King. His work can be found online at https://www.narellecartoons.com/

If you’re ready to take humor seriously and seriousness humorously, join us for this funny and profound conversation that will cover political correctness and the #METOO movement, humor as a tool for persuasion — and enlightenment.