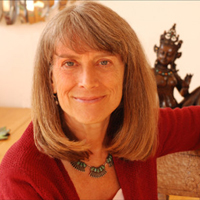 An Interview with Hallie Igelhart Austen, Author of The Heart of the Goddess: Art, Myth and Meditations of the World’s Sacred Feminine

“Time to replace rule by the scared masculine with the sacred feminine.” — Swami Beyondananda

If there’s been any awakening in the wake of the 2016 election, it’s been the awakening of women’s power, and more recently, the Sacred Feminine. As we are more and more coming to understand, this is not just about boys and girls, boys and girls.

The sacred feminine — as with matriarchal societies in the ancient world — is not about the feminine dominating over the masculine, but rather a co-equal partnership where there IS NO domination, bullying, violence or exploitation.

And, the dominate-or-be-dominated meme that has characterized Western so-called civilization for millennia is a direct result of the absence of the sacred feminine. Consider how different our nation (and world) would be if our Founding Fathers had including Founding Mothers, if in adapting and adopting the Iroquois Nations’ political system, they had included the Council of Grandmothers along with balance of powers and a federal system?

In the Iroquois Nation, after all, it was the elder women who decided if and when the nation went to war, and they also could impeach an unscrupulous or incompetent chief. But because in 1787 it was culturally impossible to give Martha, Abigail, Dolley or Betsy a seat at the council, we are paying the price today. We have a heartless, mechanistic system that utterly discounts and misunderstands the feminine, and is bent on the four E’s of Evil — extraction, exploitation, extortion and extinction.

No individual is to blame for any of this. Most humans on the planet want the same things — clean air, clean water, clean food, clean government, respect for one another and the natural world. But because there is no over-arching context or movement speaking to this one fundamental issue, we have been at the merciless mercy of “might makes right.”

Our guest this week on Wiki Politiki, Hallie Igelhart Austen, author of The Heart of the Goddess: Art, Myth and Meditations of the World’s Sacred Feminine, offers insight and encouragement for renewing and re-establishing the wisdom of the Goddess in our lives and world.

Hallie Iglehart Austen grew up on a farm and has lived close to the earth for most of her life. Her lifelong interest in goddesses began at the age of twelve when she started studying ancient Greek language and mythology at Bryn Mawr School. After graduating from Brown University, she drove from England to Nepal and back again over the course of a year. This journey, described in her book, Womanspirit, led to her synthesis of spirituality and feminism, which she first started teaching in 1974. She has led workshops, rituals and conferences at the University of California, United Nations International Women’s Conference, and Graduate Theological Union among others. She created Womanspirit Meditations and collected worldwide Goddess art, myth and meditations in her book, The Heart of the Goddess.

What can we learn from the ancient art depicting the Goddess and life in a matriarchal culture? How can men relate to and use this wisdom? How do we bring these understandings to the here-and-now, to inspire and unite us at a critical time?

Tune in and find out!

To find out more about Hallie and her book, please go here (https://heartgoddess.net/)