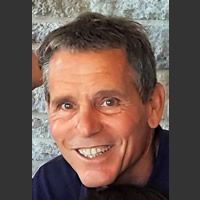 A Conversation With Author Joe Simonetta

“Of course Jesus believed in evolution. Otherwise he would have said, ‘Now don’t do a thing till I get back’.” — Swami Beyondananda

At a time when “reality” is up for grabs, and the chasm between competing worldviews in this country seems almost unbridgeable, could there possibly be a unifying thought, idea, human aspiration that can unite us?

Architect, author, and Harvard Divinity School graduate Joe Simonetta thinks so, and he has boiled it down to seven simple words. No, I won’t tell you what those words are. You’ll have to tune in to find out. I will tell you, they are NOT the seven words that George Carlin said cannot be said on the air!

In Spontaneous Evolution, Bruce Lipton and I recognized that our world was caught between two competing paradigms, neither of which by itself could take us through the current “existential crisis” of our species. Whether we acknowledge it or not, our species is currently in the question, “do we continue to exist, or not?”

Perched atop the “endangering species” list, and the list of endangered species as well, either we seize the time today and evolve into a wise, coherent, sane and integrated species — or else our time will be seized from us.

The two competing paradigms — monotheistic religion and scientific materialism — each simultaneously hold key pieces to the puzzle, and yet are in other ways obsolete, and “obsolethal.”

Monotheistic religion with its off-planet God, patriarchal and hierarchical system, has condemned our species as “original sinners.” (If you think this is no longer the case consider that one-time Catholic priest Matthew Fox was first silenced and then ex-communicated for writing a book, Original Blessing.)

On the other side of the religious secular divide, we have scientific materialism that insists that only the material world is “real”, and that has given us technology with no morality. Those scientists who acknowledge the ineffable and invisible that every human has observed for themselves (think about someone flashing into your mind, and having that person call a few minutes later) are branded as “quacks”. That’s why Rupert Sheldrake’s TED talk was banned (https://youtu.be/JKHUaNAxsTg) and why neither Bruce Lipton nor I were EVER interviewed on NPR.

Meanwhile, there IS an evolutionary upwising, as integral thinkers recognize that each stage of evolution “includes and transcends” prior stages. That means we take the value from each prior meme, and weave it into a new and more complete awareness.

This is why Joe Simonetta’s (http://7wordschangetheworld.com/author/) work has such potential in these evolutionary times. His simple prescription for a world of thrival for each and all is based simultaneously on the fundamental awareness “under-truthing” all religious and moral thought, AND can be shown to work by observation, without need for an invisible off-planet God. Writes Joe in his book, 7 Words That Can Change The World, “Sacredness is not about a Supreme Being. It’s about a way of being.”

In an information age when we are overwhelmed by content, this might just be the context we have been seeking. Please join us for an enlightening conversation to start the New Year, and maybe a new world.