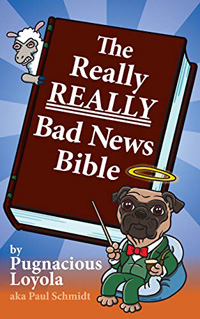 As a purveyor and advocate of “Cosmic Comic Consciousness”, I appreciate the power humor has to poke around our belief systems, expose contradictions (Swami calls it “pumping ironies”), and do it in a way that lowers defenses. Years ago, when we performed at the Kerrville Music Festival, a Texan came up to me and declared, “You tell people what they don’t want to hear in a way that they want to hear it.”

So I am always looking for mind-expanding humor that delicately (or sometimes indelicately) dissects belief systems we hold dear. As the Swami says, “When you see a sacred cow, milk it for all it’s worth.”

And that brings us to Paul Schmidt, author of a mischievous tome called The Really REALLY Bad News Bible, which takes the stuff many people take literally even more literally, leaving the landscape literally littered with dogma poop. I interviewed Paul earlier this year, and now that his book is out (see below), and the rest of us seem to be “in”, the timing seems just right.

Paul — why the “Really REALLY Bad News Bible”?  Why the book and why the title?

First off, thanks for doing this interview with me and thanks again for writing the Preface for my book as well as the various Groucho Marxian headers. I like your humor even more than Groucho’s, especially the way it reflects your spiritual bent and deep desire to help make the world a more conscious, kinder place.

Yes, I have always considered myself a Marxist of the Groucho variety, although Chico was the only true dialectic materialist – he did all his material in dialect. Anyway, the book.

Okay. I wrote and named this book as I did because, in my view, Christianity could use something of a reality check on what it has historically claimed to be ‘good news’, as in the ‘good news Bible’. My adventure began roughly two decades ago when I became involved with a woman of the Christian fundamentalist persuasion who almost immediately became obsessed with converting me to her faith, which included a belief in the Bible as the literal, inerrant Word of God. From her perspective, virtually everything in the Bible had to be literally true because the Bible presented it thus, and even the most fantastical claims were no exception. Despite many efforts to reason with this woman, it quickly became clear to me that she was unwilling, or unable to budge even slightly on any of her biblical beliefs.  Fascinated by this astounding intransigence, I started investigating alternative ways of reaching people who are committed to the Bible, as literally interpreted. Comic relief seemed the best approach, given that British philosopher Alfred North Whitehead had surmised, “The most singular thing about the Bible is its lack of a sense of humor.”

Not surprising then that many true believers consider Whitehead a blackhead on the face of Christianity. Anyway … What possessed you (hmmm… maybe not the best choice of words) to write this book?

Ha! My little book actually attempts to move the reader in the opposite direction, Steve- that of de-possession, specifically from the various unholy ghosts of irrationality, violence and other unsavory things which haunt the pages of the Bible, even in the name of the Holy Spirit. It brings me joy to see people enlighten up, even if the process may at first be uncomfortable.

Other than busting unholy ghosts, how are you looking to impact the reader?

I want to communicate as best I can that whether or not something is fishy in Denmark, this is definitely the case in stories from ancient Bethlehem, Jerusalem and the messy rest, at least as regards problematic reporting from the 66 or 66+ Bible authors.  As we better separate fact from fiction and fiction from fact, it perhaps allows the Christian fish and the Darwinian one to break bread together, fast becoming friends. But regardless of the origin of our species and of life in general, all or most things spiritual do remain something of a colossal mystery.

Spoken like a true graduate of Agatha Christie Mystery School. Who is your audience for the book?  Why would they want to read it?

I would say there are three groups: the first encompasses those folks interested in the origin and history of the Bible, especially in terms of how the Bible has informed and shaped our society and culture in this nuclear age. The second is, the group of people who see the Bible as Holy Scripture, but are uneasy with the “good book’s” myriad inconsistencies, and would like to resolve this differential in perspective. The third is, those who would like to have a more lighthearted way to engage with family members, friends and acquaintances who are intent on saving them whether they are looking for that or not. I do believe that almost anyone in the three groups (and perhaps others), will be significantly enriched by reading the book. It’s undeniably a very quick read, so very little time will have been squandered.

Well, thanks for heralding a “new clear” age, to help people separate the wisdom from the chaff. I’m curious about own spiritual and religious background — what was it, and how did it influence the content and feel of the book?

The great pioneer of psychoanalysis Otto Rank claims that humans are hard-wired to be religious, and I am no doubt living proof. Oh heck, I was raised Catholic and almost became a Trappist monk before deciding not to become trapped. Then, like any self-respecting college student, I briefly became an atheist before gratefully being visited by two distinct mystical experiences, oddly enough while reading books! One of these experiences came while I was in the middle of Gabriel Marcel’s “Being and Having” and the second came via “The Mind of Light” written by Vedic philosopher Sri Aurobindo. Maybe being a bit spiritually lightheaded going forward, I ended up for several decades all over the spiritual board, serving at various times as an ordained minister in a quirky counter cultural religious sect and as a Vedic priest (Brahman) in a Bhakti Yoga cult. I even tried going back to my Christian roots!

Sounds like you tried all kinds of kinky sects, although clearly consensual. Tell us more.

My idealism regarding organized religion finally disintegrated, having taught me by significant negative example to mistrust religious authority and to better question the kind of faith that’s married to outrageous supernatural claims. I became fiercely interested in helping bust religious myth labs, and in a very real sense, the book I’ve written is my major life’s work in this regard.

Most people would call this book “irreverent” and some might call it “insulting”.  What are your thoughts about that?

Well, maybe I missed my vocation and should have become a comedy insultant, consultants being a dime a dozen these days. But really, irreverence can sometimes serve as a much needed antidote to the kind of venomous religious reverence that takes itself way too seriously and thus enslaves its followers. Not to be confused with poetic seriousness; I’d say that poetic seriousness is fine, although admittedly my poetic license was revoked long ago.

Yeah, mine too. I flunked my visioning test. Anyway, Paul it’s been a pleasure to have you.

Thanks again, Steve, for interviewing me.

You can check out Paul Schmidt’s book, The Really REALLY Bad News Bible here on Amazon, and I encourage you to read it and write a review.