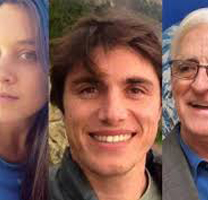 “Earth — love it or leave it.” — Swami Beyondananda

“I promise to be the best lover and defender of the Earth that I can be.”

Can taking such a vow make a difference?

Skylar Wilson, our guest on Wiki Politiki this week thinks so. He, along with Matthew Fox, the noted priest and father of Creation Spirituality, and Jennifer Berit Listug have founded a “spiritual order” for our times, the Order of the Sacred Earth.

I am reminded of a famous Gandhi quote. When asked what he thought of Western Civilization, he replied, “I think it would be a very good idea.”

While our civilization has excelled at science, technology, and the gleaning of material knowledge, we seem to be on the verge of flunking Wisdom 1.1. Ever since we put Descartes before the horse nearly four centuries ago, society has focused its attention on the material world as the be-all and end-all. And the “end-all” idea may be exactly where we are headed.

Thanks to focus on the rational mind at the expense of the intuitive, and the patriarchal notion of man “dominating” nature, we have continued to act as if that’s true, at our peril. As Paul Ehrlich famously said, “Nature bats last,” and she has some heavy hitters coming up — fire, tornadoes, hurricanes and floods.

At a time when precious little is considered sacred anymore, and when we humans have spiraled dangerously outside the web of life, the intention of the Order of the Sacred Earth is to unite spirit and matter in one movement. As they write:

At this critical time in human and planetary history, the world does not need a new religion or even a reshuffling of our old religions. It does not need a new church either. What it needs is a new Order: a community and movement of people of varied belief systems (or non-belief systems) who share one sacred vow: to preserve Mother Earth and to become the best lovers (mystics) and defenders (warriors) they can be on behalf of Mother Earth. A post-denominational Order and a post-religious Order. Therefore, a Spiritual Order.

And yet another quote, this one from Albert Einstein: “The field is the sole governing agency over the particle.” Most social change movements have been about moving the “particle” — working on the symptoms of issues rather than facing and confronting the “field” — of beliefs, misperceptions and institutions — that “move” the particles of our every day activity.

If a spiritual order that holds Earth sacred seems like a “tall order”, it may be the one thing to cohere a movement of movements so that collectively we shift from “takers” to “givers”, from exploiters to stewards, from alienated individuals to loving community.

Can a “spiritual order” help spark and empower a truly NEW world order? Join us and find out.

To find out more about the Order of the Sacred Earth, please go here.