“If you don’t like the current programming, turn off your TV and tell-a-vision instead.”
— Swami Beyondananda 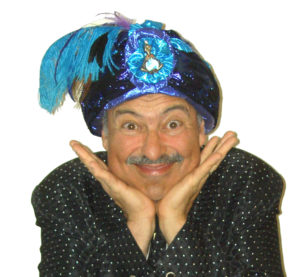 Meanwhile, on our teeny tiny planet — known across the galaxies as Comedy Central — the shift has hit the fan. They say crisis precipitates evolution, and judging by the multiple crises we face — ecological, economical, political and personal — the chances of precipitation are 100%.

Yet no matter how dire things may appear, I remain, as far as mystics go, a “cautious optimystic.” Though the pessimystics may look at the “shituation” and see a glass 95% empty, not me. I see a glass 5% full.

As for the future, I’ve been to them all. Don’t forget, I was a futurist in a past life. As far as I can foresee, we have a bright future ahead of us. Now all we have to do is figure out how to get to THAT future instead of the blight future we seem to be hurtling toward.

Yes, our entire species is in the midst of an existential crisis. We must decide if want to continue to exist any longer. Humanity — and its wicked stepchild, inhumanity — has zoomed to the top of the Endangering Species List by being so obsessed with income that we’ve failed to consider the outcome: If we lose the Earth, there goes the GDP.

To avoid dealing with this inconvenient truth, we have made ourselves susceptible to convenient lies. The body politic has become strung out on two dangerous drugs, Hopium and Deniatol, while the media assaults us daily with weapons of mass-distraction. The two sides attack each other left and right with detestimonials and insinuendoes, so we spend all our time mass-debating instead of creating a healthy brainchild together. Talk about mass-debating making us go blind!

While global warming is cooking our goose, all attention has been fixated on Donald Trump, and when it comes to garnering attention, he is in a crass of his own. The way he’s been pumping ironies, comedians can’t keep up.

Sure, it’s easy to say that not only has Trump proven anyone can grow up to be President, he’s proven you don’t even HAVE TO grow up to become President. It’s easy to protest, “How can anyone say he is not acting like an adult? He has committed COUNTLESS adulterous acts.” It’s easy to comment that Donald Trump has been heralded as an outlier and it’s true … in just two years, he has already out-lied all the other Presidents combined.

And it’s easy to celebrate him as America’s most honest politician — because unlike all the others, he TELLS you he is lying.

I prefer seeing him as America’s “balloon karma payment” that is putting the dark of heartlessness in our face, so that we finally face what we have been unwilling to face — 5,000 years of rule by the lowest common dominator, and the rule of gold: Doo-doo unto others before they can doo-doo unto you. I see Donald Trump as Public Enema Number One because he is helping to purge the mountains of bullshit and release the residoodoo. This is the biggest toxic dump we will be taking since the original thirteen colonics.

It has been said that the truth shall upset you free, and indeed the veil is being lifted on the dark and secret perpetrations of the deep state. Some claim that Trump will save us from the deep state, but in these evolving times, it makes no sense to replace covert skullduggery with overt scumbaggery.

The only way to overgrow the deep state is by cultivating a deeper state, and the way to overcome fake news is through a higher truth movement. And that higher truth? We are all cells in the same body politic, and that instead of fighting one another in a deadly autoimmune disease, we must bring left and right front and center to face the music and dance together.

To be blunt, the mainstream media is a brainwashing machine stuck on spin. Fortunately, there is an alternative. If we don’t like the current programming, we can choose to turn off the TV and tell a vision instead. That’s where I tell a vision to you, and you tell a vision to me, and we have healing and functional visions to step into. And that beats what we’ve been stepping into.

Shortly after the 911 attacks, fear-gnomes — little gnomes of gnawing fear — were released into the mainstream, making the body politic susceptible to a whole slew of diseases — irony deficiency … truth decay … electile dysfunction … deficit inattention disorder … and of course, Mad Cowboy Disease. And what emerged was the fear-based Department of Homeland Security.

And now, as part of the Great Upwising, we need to create a love-based Department of Heartland Security — because our true security is in the land of the heart.

The Bible says, where there is no vision the people perish. Unfortunately the mainstream media starves our visionaries and feeds the DIVISIONARIES. The current two parties offer us a dubious choice: positive change in very small increments, or negative change in very large excrements.

That is why it is up to a critical mass of the heretofore uncritical masses to withdraw attention from the “identity issues” that divide us and focus on the IDENTICAL ISSUES we all face: clean air, clean water, clean food, clean government. It’s time to stop out-venting against one another, and start inventing together. So let us come together and tell-a-vision for Heartland Security. I will start.

Imagine … think tanks where they think about something other than tanks, and young people get to live for their country instead of dying for it.

Imagine … government of, by and for the people, where the government does the PEOPLE’S bidding, not the bidding of the highest bidder.

Imagine … achieving TRUE minority rights, where each of us has the inalienable right to be ourselves, an indivisible minority of one, each of us one-of-a-kind, just like everyone else.

Imagine … political partisans on all sides TAKING UP ARMS … to hug one another.

Imagine … we the people coming to a commonly-sensed, uncommonly sensible consensus — we would rather live by the Golden Rule than die by the rule of gold.

Yes, yes. I know what you’re thinking. The Swami is proposing a sane world. He must be CRAZY. So I invite you to commit yourself to creating a sane asylum where we make fake news irrelevant by creating some REAL NEWS together. Who needs reality TV when we have REALITY?

This is the movie we’ve all been waiting for, the thriller of a lifetime, the ultimate hero’s journey, where our entire species is starring in the hero’s role. So here is the question: Can we undo the doo-doo that has been done, or will the done doo-doo be our undoing?

To quote the great philosopher and centerfielder Willie Mays, “That’s what we’re playing the game to find out.”

Ready to join the upwising? Let’s go for heaven on earth, and have a hell of a time doing it.

In addition to the State of the Universe appearing in Funny Times’ April issue, the Swami was asked to present at San Francisco’s prestigious Commonwealth Club on the highest of high ho-ho-holy days, April 1st. If you were unable to be there then, you can “be there now” — or anytime you like — if you “join the upwising” to help bring laughter and spiritual and political enlightenment to a world suffering from humorrhoids — not to mention truth decay, irony deficiency, and electile dysfunction.

For “jest” $15, you get three funny and inspiring items:

√ An audio recording of the hour-long presentation at the Commonwealth Club — guaranteed to up-level your mood or DOUBLE your grumpiness back!

√ An inspiring audio recording of Spontaneous Evolution: A Universal Love Story, a Sunday-morning talk on our TRUE evolutionary destiny, should we choose it.

√ Swami’s first book in fifteen years, Totally Quips of the Swami: A Compendium of Cosmic Comic Wisdom, ” imparticles of wisdom served up by the epigram,” available in digital form later this month.

If you value a good laugh — or many, many of them — you can order through PayPal here, and you’ll also get a serious (and yet bright) take on our evolutionary future that happens to be here now!

May the FARCE be with you!

Swami Beyondananda, cosmic comic, pundit, and uncommontator, whose favorite yoga pose is tongue-in-cheek can be found online at https://www.wakeuplaughing.com/. He is available for live performances, as well as Skype events so you can have Swami show up in your living room without actually having to feed him. He can be reached at <info@wakeuplaughing.com>