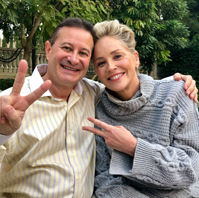 An Interview with Filmmaker Emmanuel Itier

“If you don’t like the current programming, turn off your TV and tell-a-vision instead.” — Swami Beyondananda

Sure they were originally called “movies” because they were “motion pictures”. And there is something about the total immersion in a darkened theater watching a large screen that “puts us in the picture” and creates a totality of experience that is not just intellectual, but visceral and all-encompassing. That’s why movies move us.

Can movies move us toward an actual movement that moves the world?

Our guest on Wiki Politiki this week, filmmaker Emmanuel Itier thinks so. Born in France, Itier moved to the US 30 years ago and has used his platform in recent years to promote consciousness, and political and spiritual transformation.

His most recent film — created in collaboration with Executive Producer Sharon Stone, is called WE THE PEOPLE — a worldwide exploration of the notions of politics and economics with the likes of Robert Reich, Deepak Chopra, Sharon Stone, Michael Beckwith, Nobel Peace Laureates Mairead Maguire and Tawakkol Karman, Vandana Shiva, Mark Wahlberg, and many others. Says Emmanuel, “If we cultivate caring economies and politics maybe we can build a sustainable planet full of peace, justice and love for everybody. When you watch WE THE PEOPLE you will realize we are not focusing at putting anyone, any party, down but we are focusing on the possible solution to better our Humanity and use the tools of politics and economics to build a sustainable future.”

In the subtitle, Emmanuel uses a compelling and “swami-esque” phrase, “Re-evolution” to cite the need to move beyond the old paradigm “revolution” to the far more constructive and generative “evolution” to describe the passage in front of us.

He says, “This is a re-evolution of peace and love. How can we re-invent ourselves as one humanity, all interconnected, all interdependent from each other? Yes, we need a real change, a real shift of mind set and start looking again as collaborative forces and not as competitors, a peaceful neighbors and not segregated individuals. We need also a leadership inviting us to unite beyond our difference of opinion because we share the same land under the same sky.”

Emmanuel Itier has enjoyed more than two decades of film success prior to this documentary. He directed: Tell Me No Lies (2000), Scarecrow (2002), The Invocation (featuring Deepak Chopra, Desmond Tutu and the Dalai Lama) and Bermuda Femme (2013). He also produced: Wildflower (1999) and Scarecrow Slayer (2003). In addition, he acted as a co-producer and financing consultant for Johnny Mnemonic, Another 9½ Weeks, Shattered Image (1998), The Dentist (1996), and Progeny (1999). Itier has also been a successful music and film journalist for rock magazines, French TV networks and the Internet for over twenty years. Finally Mr. Itier was a recipient of the 2018 Global Citizen Award from the prestigious United Nation Association, and was named President of The Year 2018 by the Rotary E- Club of World Peace.

Can movies “move us” to massively mobilize and move?

Tune in and hear what a “new edge” filmmaker has to say.

To find out more about Emmanuel Itier and We the People please go here: https://www.firstshowing.net/2018/trailer-for-doc-we-the-people-questioning-global-politics-economics/