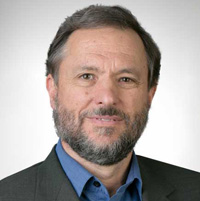 With Bernie Sanders surging into the lead as we come to Super Tuesday, the “stop Bernie” forces on the moderate side insist that Bernie can’t win in November. But, what if he is the ONLY candidate who can truly overwhelm Trump?

Can his movement of young people inspired to vote counterbalance those “moderate Republicans” who might switch from Trump to either a Biden or a Bloomberg?

Weighing in on this issue on Wiki Politiki Radio is scholar and Middle East scholar Stephen Zunes, who recently wrote a piece for Truthout debunking the idea that a progressive candidate cannot win the general election. Zunes, who as a teenager worked for the George McGovern campaign, insists the comparison between McGovern, who lost in a landslide, and Sanders holds no water.

Dr. Stephen Zunes is a Professor of Politics and International Studies at the University of San Francisco, where he serves as coordinator of the program in Middle Eastern Studies. Recognized as one the country’s leading scholars of U.S. Middle East policy and of strategic nonviolent action, Professor Zunes serves as a senior policy analyst for Foreign Policy in Focus project of the Institute for Policy Studies, an associate editor of Peace Review, and a contributing editor of Tikkun.

And speaking of the Middle East, I’m sure our guest will have something to say about Bernie’s approach to Israel and Palestine – in sharp contrast to the other leading candidates.

If you want to go deeper into Bernie’s appeal, U.S. policy on the Middle East, and why the Democratic Party establishment is so hell-bent against Bernie please tune in.