How to Defy Gravity In Unfunny Times

“Levity helps us rise above whatever is bringing us down.” — Swami Beyondananda

As Johnny Cash famously sang, I walk the line.

For my day job — which paradoxically, I most often do at night — I perform comedy as Swami Beyondananda. In my other life, I am a one-time political scientist (who never got to dissect a politician in poly sci lab) who now recognizes that only when we the people come together in fruitful conversation can we “overgrow” our current fruitless polarization that keeps a dysfunctional system in place.

My work — and play — is to simultaneously help people take humor more seriously and seriousness more humorously. The question that often comes up — as expressed by the archetypal Jewish uncle, “So … from THIS you make a living?”

And the answer is, yeah … even though I’ve never seen an actual ad: “WANTED: Cosmic comic healer of the body politic.”

Ever since Trudy and I left Ann Arbor in our van and trailer to launch our traveling road show nearly 33 years ago, we’ve had to find creative ways to keep our enterprise going — and frankly weren’t able to put much away to provide for our “exit prize.”

Someone recently suggested we do a crowd-funding campaign to support both our enterprise and exit prize. So we decided to launch the kind of “crowd-funding” campaign that existed before crowd funding. It’s called provide something of value that people want and need, and offer different levels of commitment depending on what they want and need.

From feedback and “feed-forward”, it’s clear that people want and need the perspective of humor to lift themselves from fear to functionality, from reactivity to creativity, from being at the effect of to being effective. If heart-opening, mind-expanding humor helped Norman Cousins heal a life-threatening condition, could this work with the body politic as well?

We are making this available via PayPal for “jest” $15.

Seriously and humorously, we are looking at selling a thousand of these by April Fools Day, through our own list and those of our loyal friends and co-hearts who want to “prolaugherate” cosmic comic consciousness while awakening and inspiring the body politic.

Thank you for helping us to thrive, as we bring thrival to all! For the first HUNDRED people who purchase this special, we will have another SURPRISE offering, so strike while the irony is hot! 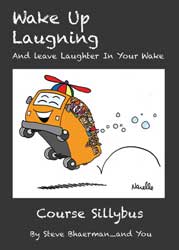 For those who want to go deeper into not just waking up laughing, but leaving laughter in your wake, we have our self-paced Defying Gravity class, which now includes an HOUR of one-on-one coaching! Normally $199, for limited time jest $99. Go here to order.